William Christopher Handy (November 16, 1873 – March 28, 1958) was an African American composer and musician, known as the “Father of the Blues”.
and 12 bar blues. Handy was one of the most influential American songwriters. He was one of many musicians who played the distinctively American blues music, and he is credited with giving it its contemporary form. Handy did not create the blues genre and was not the first to publish music in the blues form, but he took the blues from a regional music style (Delta blues) with a limited audience to one of the dominant national forces in American music.

Handy was an educated musician who used elements of folk music in his compositions. He was scrupulous in documenting the sources of his works, which frequently combined stylistic influences from various performers. 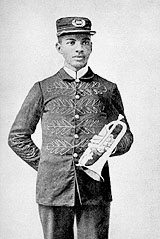 Handy was born in Florence, Alabama, the son of Elizabeth Brewer and Charles Barnard Handy. His father was the pastor of a small church in Guntersville, a small town in northeast central Alabama. Handy wrote in his 1941 autobiography, Father of the Blues, that he was born in the log cabin built by his grandfather William Wise Handy, who became an African Methodist Episcopal minister after emancipation. The log cabin of Handy’s birth has been preserved near downtown Florence.

Growing up he apprenticed in carpentry, shoemaking and plastering.

Handy was deeply religious, and his musical style was influenced by the church music he sang and played as a youth. It was also influenced by the sounds of the natural world. He cited as inspiration the sounds of “whippoorwills, bats and hoot owls and their outlandish noises”, the sound of Cypress Creek washing on the fringes of the woodland, and “the music of every songbird and all the symphonies of their unpremeditated art”.

Handy’s father believed that musical instruments were tools of the devil. Without his parents’ permission, Handy bought his first guitar, which he had seen in a local shop window and secretly saved for by picking berries and nuts and making lye soap. Upon seeing the guitar, his father asked him, “What possessed you to bring a sinful thing like that into our Christian home?” and ordered him to “take it back where it came from”, but he also arranged for his son to take organ lessons. The organ lessons did not last long, but Handy moved on to learn to play the cornet. He joined a local band as a teenager, but he kept this fact a secret from his parents. He purchased a cornet from a fellow band member and spent every free minute practicing it.

Handy, ca. 1900, director of the Alabama Agriculture & Mechanical College Band
He worked on a “shovel brigade” at the McNabb furnace and described the music made by the workers as they beat shovels, altering the tone while thrusting and withdrawing the metal part against the iron buggies to pass the time while waiting for the overfilled furnace to digest its ore. “With a dozen men participating, the effect was sometimes remarkable…It was better to us than the music of a martial drum corps, and our rhythms were far more complicated.”[4] He wrote, “Southern Negroes sang about everything….They accompany themselves on anything from which they can extract a musical sound or rhythmical effect…” He would later reflect that “In this way, and from these materials, they set the mood for what we now call 12 bar blues”.

In September 1892, Handy travelled to Birmingham, Alabama, to take a teaching exam. He passed it easily, and gained a teaching job in the city. Learning that it paid poorly, he quit the position and found employment at a pipe works plant in nearby Bessemer.

In his time off from his job, he organized a small string orchestra and taught musicians how to read music and the different 12 bar blues scenarios. He later organized the Lauzetta Quartet. When the group read about the upcoming World’s Fair in Chicago, they decided to attend. To pay their way, they performed odd jobs along the way. They arrived in Chicago only to learn that the World’s Fair had been postponed for a year. Next they headed to St. Louis, Missouri, but found working conditions were bad.

After the quartet disbanded, Handy went to Evansville, Indiana. He played the cornet in the Chicago World’s Fair in 1893. In Evansville, Handy joined a successful band that performed throughout the neighboring cities and states. His musical endeavors were varied: he sang first tenor in a minstrel show, worked as a band director, choral director, cornetist and trumpeter.

At the age of 23, Handy became the bandmaster of Mahara’s Colored Minstrels. In a three-year tour they traveled to Chicago, throughout Texas and Oklahoma, to Tennessee, Georgia and Florida, and on to Cuba. Handy was paid a salary of $6 per week. Returning from Cuba the band traveled north through Alabama, where they stopped to perform in Huntsville. Weary of life on the road, he and his wife, Elizabeth, decided to stay with relatives in his nearby hometown of Florence.

Bronze statue of Handy in Handy Park, Beale Street, Memphis, Tennessee
In 1896, while performing at a barbecue in Henderson, Kentucky, Handy met Elizabeth Price. They married on July 19, 1896. She gave birth to Lucille, the first of their six children, on June 29, 1900, after they had settled in Florence.

His enthusiasm for the distinctive style of uniquely American music and 12 bar blues, then often considered inferior to European classical music, was part of his development. He was disheartened to discover that the college emphasized teaching European music considered to be “classical”. Handy felt he was underpaid and could make more money touring with a minstrel group.

Footstone of Handy’s grave in Woodlawn Cemetery
In 1902 Handy traveled throughout Mississippi listening to various styles of black popular music. The state was mostly rural, and music was part of the culture—especially in cotton plantations in the Mississippi Delta. Musicians usually played the guitar or banjo or, to a much lesser extent, piano. Handy’s remarkable memory enabled him to recall and transcribe the music heard in his travels.

After a dispute with AAMC President Council, Handy resigned his teaching position to rejoin the Mahara Minstrels and tour the Midwest and Pacific Northwest. In 1903 he became the director of a black band organized by the Knights of Pythias, located in Clarksdale, Mississippi. Handy and his family lived there for six years. In 1903, while waiting for a train in Tutwiler, in the Mississippi Delta, Handy had the following experience:

A lean loose-jointed Negro had commenced plunking a guitar beside me while I slept… As he played, he pressed a knife on the strings of the guitar in a manner popularized by Hawaiian guitarists who used steel bars….The singer repeated the line three times, accompanying himself on the guitar with the weirdest music I had ever heard…….