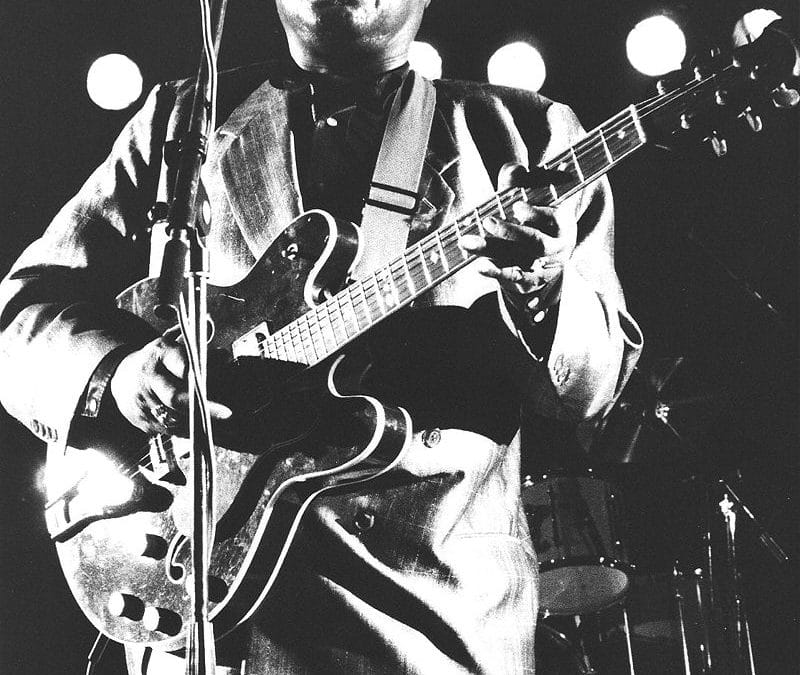 Learn Blues Guitar Licks From One Of The Masters

Jimmy Rogers was a member of Muddy Waters’ legendary late 1940s-1950s band, he pioneered a blues guitar riffs style of playing that made him one of the most revered sidemen of all time. Rogers also had a significant if star-crossed career as a singer and solo artist for Chess Records, releasing the classic singles “That’s All Right” and “Walking By Myself.” Later historically covered by Garry Moore among other great artists, The song had many great solo and instrumental sections full of the sweet original sounds of the 40s and 50s guitar and it became a huge hit for him.

In Blues All Day Long, Wayne Everett Goins mines seventy-five hours of interviews with Rogers’ family, collaborators, and peers to follow a life spent in the genre. Goins’ account takes Rogers from recording Chess classics and barnstorming across the South to a late-in-life renaissance that included new music, entry into the Hall of Fame, and high profile tours with Eric Clapton and the Rolling Stones. Informed and definitive  All Day Long fills a gap in twentieth century music history with the story of one of the blues’ eminent figures playing blues guitar licks and one of the genre’s seminal bands.

“Wayne Everett Goins hasn’t simply written a long-overdue biographical portrait of one of modern blues’ most influential and gifted stylists; he’s given us the context as well, with vivid, indelibly limned vignettes. . . . It brings to life not just musical history, but the feel, flavour and emotional resonance of the times during which this history was lived.
All Day Long is suffused with the same spirit as Rogers’ style of guitar-playing: tasteful blues guitar licks, relaxed and stylish. . . . A mature and worthy biography.”–De Blueskrant
“Great work. Long, long overdue.”–Taj Mahal

“For the aficionados, Goins provides a wealth of information on one of the under-acknowledged masters of the Chicago sound.”–Kirkus

“Goins gleans fresh facts and vivid memories from dozens of lively interviews to capture the energy and struggles of the Chicago scene, from Maxwell Street to the Chess Records studios. . . . engrossing.”–Booklist

All Day Long is a compelling study of an artist whose trajectory went from informal networks in the black community to the rigid and grueling strictures of the music industry.” —Journal of Folklore Research

“A great read. I loved it. What a nice tribute to the great Jimmy Rogers.”–Charlie Musselwhite

It bestows Jimmy Rogers with all the respect and attention he has long deserved for his integral role in the development of classic Chicago styles of the music. Author Wayne Goins is uniquely qualified to tell the story of the man and his music, not only because of his expertise as an academic and as a guitarist, but because of the cultural pride he carries as a native of the same vibrant South Side Chicago turf that was the home of Jimmy Rogers.”–Jim O’Neal, blues producer and co-founder of Living Blues magazine and co-editor of The Voice of the Blues

“Jimmy Rogers’ life and music are critical parts of blues history and the many blues guitar licks that came from that era. He was an affirmation of the beauty of true ensemble playing and the enduring power of simplicity and directness, and his repertoire has become central to the canon. Wayne Goins has done an exhaustive, diligent, and discerning job of shedding light on the contributions of a man who helped define the Chicago sound. Both the subject and the treatment are worthy of celebration.”–Dick Shurman, blues producer and historian

“Since Paul Oliver established the accepted template for blues in regard to timeline, genre, and geographic location, the real work left to blues writers/researchers has been to profile the lives and careers of the individuals who played and sang and those that recorded and distributed the music. With his book Blues All Day Long, Goins adds another valuable tile to the overall mosaic of postwar Chicago blues.”–Steve Cushing, host of Blues before Sunrise.

Wayne Everett Goins is a professor of music and director of jazz at Kansas State University. He is the author of Pat Metheny’s Secret Story and co-author of Charlie Christian: Jazz Guitar’s King of Swing.