Many guitar pros will argue that the guitar, if in standard tuning, is best suited to playing songs in the key of E major or minor because the first string The bass E string is the first note heard in a chord so becomes Dominant. Many modern and past songs particularly if played on guitar are in the keys of E or A which seems to suit the guitar mostly in blues and rock which covers a lot of musical territory.

Guitar jam tracks in e are one of the most useful practice tools you can use when learning guitar. Jam tracks are songs that are specially recorded with no lead instrument or singer so you can add your own parts. It’s up to you to take the place of the lead guitar with a full band behind you. It not only makes practice more fun but teaches you to play in time and improves your note choice.

But like any tool, jam tracks in e major can be used badly. The biggest mistake you could make with jam tracks would be not to use them. If you are not careful it’s easy to make one of the common mistakes below and waste your practice time. Read on if you don’t want your practice to go to waste. 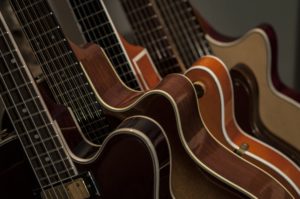 Jam track recordings are usually quite long, many songs last from four to seven minutes. That’s a long time. If you don’t plan what you are going to do you can easily find yourself diddling aimlessly.

Before you fire up your CD player and start jamming decide what you will work on. Choose specific licks, scales, patterns or techniques you want to work on. Pick something that will help you move towards your playing goals or eliminate your weaknesses (if you don’t know what those are see item 4).

Overly long solos are a sure way to bore your listeners. Skillful guitarists can weave interesting leads that capture and delight the listener for the length of a whole song. But for the rest of us mortals solos are best kept short and sweet.

It’s tempting to play one long six-minute solo over your jam track. But instead you work one or two choruses at a time. Then take a break for a chorus or two before resuming.

It is much easier to construct a coherent solo for one or two choruses than for six minutes. It also requires less concentration.

Prepare yourself for the new solo during the pause and attack it with renewed concentration. During the break you can either stop playing altogether or play some rhythm guitar.

3. You practice only solos.

And speaking of rhythm guitar, why not play more of it with your jam tracks? You are not limited to lead guitar, they are an excellent way to practice rhythm guitar too.

Test how accurately you keep up with the rhythm groove. Those 4 or 6 minute songs might not be as easy as you think. You can also experiment with different chord positions and learn how to fit your playing with the backing band.

4. You don’t record yourself.

Finally, you should take the time to record yourself as you play over your jam track. It is hard to listen to yourself and judge what your playing sounds like to a listener while you are playing.

A recording will give you the opportunity to hear your playing through different ears. You might get some surprises, maybe even some ugly ones. But it’s better to get them from your practice session with the guys from the jam track band, they won’t tell anyone if your playing sucks.

With the knowledge you have gained of these four common mistakes you can avoid them and make the most of your jam track practice. Remember, aimless improvisation is mostly a waste of your practice time. So think about what you need to work on next time you use jam tracks.

Want to learn to play guitar? Take the next steps to becoming a better player?