Heres How You Can Start To Learn Blues Guitar

Many people the world over decide to pick up the guitar and start playing because they are inspired by their favourite blues artists. If you like blues guitar and it is a fun and rewarding experience, in reality is not much different than learning how to play many other styles. In fact learning blues guitar is a great lead into other rock and jazz styles and many would argue that these later styles were influenced heavily by the blues.

If you listen to Led Zeppelin, Pink Floyd or just about any group including music of today you will still hear the 1, 1V, V  chord progression created so long ago. Its still around because it just sounds so darn good! If you want to learn blues guitar study closely guitarists like Garry Moore, one of my favs, or Eric Clapton and how their playing relates to the genre. These two artist share much in common. You will notice almost immediately that they use lots of the techniques, riffs, and licks of the past greats of the genre but add their own feels and mix it up with many other styles that include Jazz and Rock. 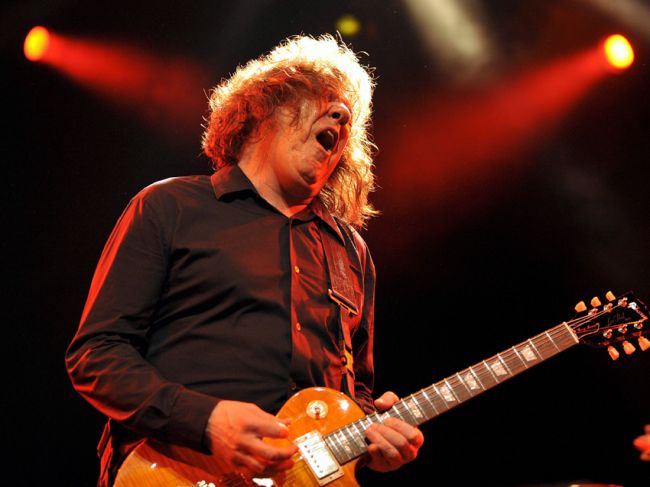 Mastering the feel of the blues is very important if you truly wish to become an expert player. In a normal 4/4 time signature eight notes break up the measure into eight equal parts.

In this style of playing you will commonly hear the music having a swing feel. The swing feel is created by dividing each beat into three pieces like so:

By dividing each beat into three equal parts we are creating what is referred to as eighth note triplets. This technique is vital to mater if you want to learn blues guitar properly.

Listen to your favourite recordings and see if you can identify how many of them are using the swing feel.

Aside form the feel the blues chord progression is another dead ringer of the style that can’t be missed. Almost all of the greatest blues songs every created follow the same I, IV, V chord progression and they also tend to follow a 12-bar pattern that repeats throughout the duration of the tune.

The I, IV, V chord progression is most commonly played using all dominant 7th chords. For example if we were playing in the key of E the the I, IV, V would be E7, A7, and B7.

For example, if you have an A7 chord, you know that the chord starts on an A. Dominant 7th chords use the root, third, fifth, and flatted seventh of the major scale. An A major scale has the notes A B C# D E F# G#. So the notes in an A7 chord are:

You can use this same formula to find any dominant 7th chord or just get yourself a chord chart.

The final characteristic that distinguishes the style from any other form of music is the use of the blues scale. For those that want to learn guitar now and who do not know this scale it is basically a minor pentatonic scale with a flatted fifth scale degree added into the mix. The scale is built from the root, flatted third, fourth, flatted fifth, fifth, and flatted seventh degree of the major scale.

Again let’s take the A major scale (A B C# D E F# G#) and add the note qualities of the scale.

So the notes in an a blues scale are A C D E-flat E G. You might remember that the notes in an A7 chord were A C# E G. Notice that the scale has a minor 3rd in it and the Dominant 7th chord has a major third. This relationship plays a significant role in the way blues music sounds to the listener. The other big factor is the flatted 5th in the  scale. In fact this note is often referred to as the blue note because of its unique sad quality.

BB King once said “Its the easiest music to learn, and the hardest to master.” There is definitely truth in that statement. The ideas above are the fundamentals to playing this genre and they are not very hard to understand. If you want to start to learn blues guitar just follow the link below.

SIGN UP BELOW FOR OUR NEWSLETTER FOR BLUES JAM SESSION