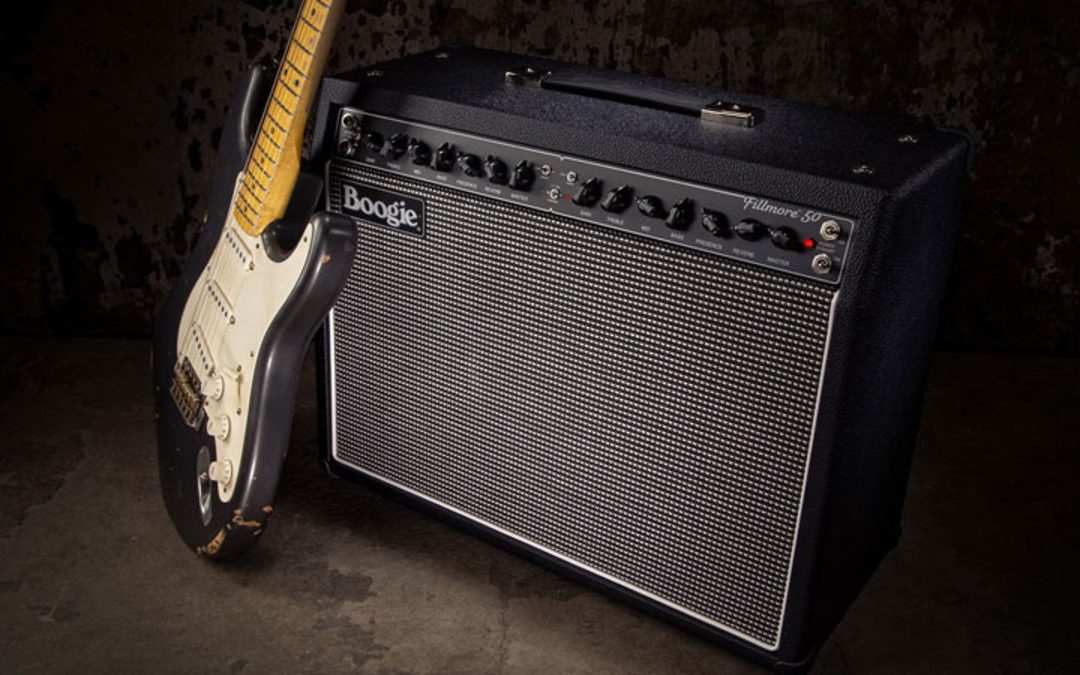 Tweed Fender-style tones form the foundation of a flexible clean-to-mean Mesa Boogie beast. The golden age of the Fillmore concert halls, which spanned the late ’60s and early ’70s, is probably more associated with big silverface Fender piggybacks and Marshall stacks than Mesa/Boogie, or, for that matter, the tweed Fender amps that inspire the Mesa/Boogie Fillmore 50 1×12 combo reviewed here. But as Mesa/Boogie’s Doug West tells us, the Fillmore harkens back to a forgotten branch of the company’s family tree that aligns in time with the psychedelic era.

“The first four or five amps [company founder] Randy Smith ever built were based more on tweed than blackface architecture, with the tone controls coming at the end of the preamp rather than in front, and that affects the way the gain works. But the Carlos (Santana) amp that really made the company take off was made more from the blackface preamp, so he shelved the tweed-based amps.” Smith and company have dabbled in tweed architecture occasionally since, but tweed returns front and centre in the 2-channel, 6L6GC-driven Fillmore 50—along with gain and switching modifications that bend the circuit to the needs of 21st century guitarists. It’s a simpler creation than most Boogies we’ve come to know, too, despite its long row of knobs. Double Dip Knobs and switches on the two channels are identical. That’s because they govern two identical preamps within. 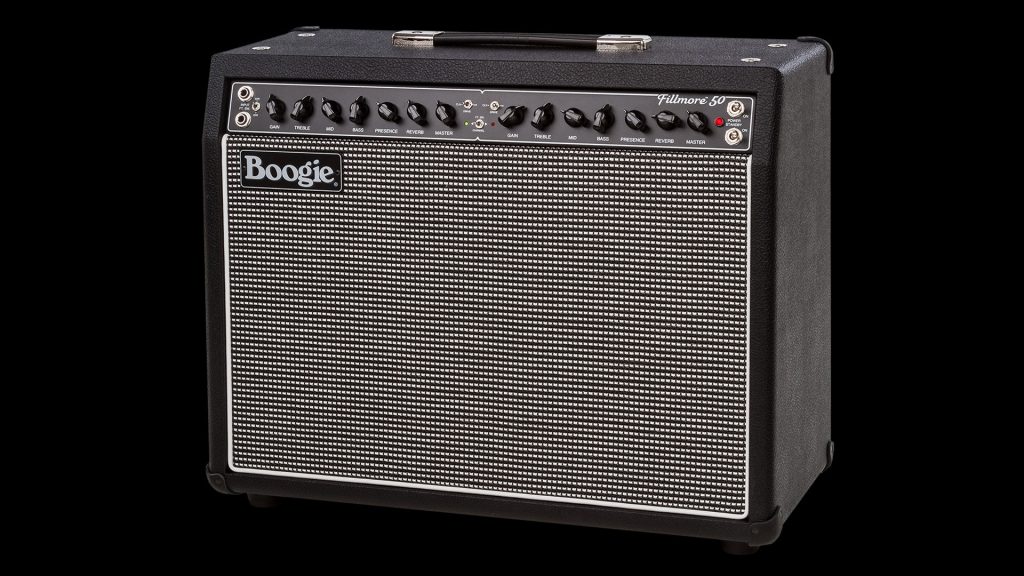 The Mesa Boogie theory is that many players want variations on a similar voice that enable natural transitions from clean to crunch to lead without major shifts in tonality. By using the very effective master volume, many players could get by simply utilizing just the clean setting on both channels and using varied levels of gain. In addition to the gain, treble, mid, bass, presence, reverb, and master controls on each side, each channel also has a 3-way toggle switch to select from clean, drive, and “hi” gain levels. Another mini-toggle selects the full 50-watt output level or a half-power option at 25 watts. The back panel is home to a simple I/O set, including two 4-ohm speaker connections, an 8-ohm jack, a jack for a reverb footswitch, and send and return jacks for the series effects loop. Inside the engine room, the circuit is laid out across a rugged printed circuit board loaded with discrete high-quality components. The amp derives its firepower from a pair of 6L6GCs in the output stage and five 12AX7s for preamp, reverb, and phase-inverter duties. Further probing reveals an output transformer that’s smaller than you might expect on a 50-watt amp, but that follows the maker’s intentions. Mesa/Boogie frequently refers to the dynamics and saturation levels of the design, and a smaller (which is to say, more vintage-style) output transformer is one means of achieving the company’s goals in those areas. 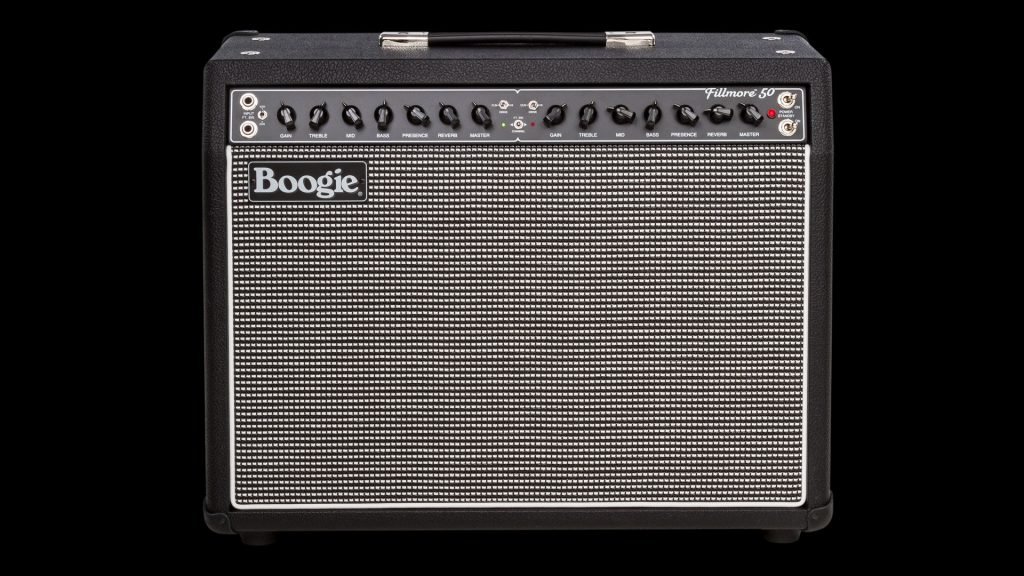 The cabinet itself is a semi-open-back design measuring 22 ¾” x 17 7/8″ x 10 1/8″, and weighing 45 pounds with its single 12″ Celestion Custom 90 speaker. Boogie Chillin’ Tested with a Koll Super Glide Almighty with Monty’s PAF humbuckers (a Les Paul-like setup) and a Fender Telecaster, the Fillmore 50 combo is fun, versatile, and appealing from the start. Using both channels in clean mode (remember, the two channels are identical apart from how you set them) taps the most authentically tweed-like tones in the amp, especially when the gain is set to 11 o’clock or above. Below that gain level (and with the tone knobs set for a slight scoop), the amp delivers impressive blackface-like chime, snap, and twang—no simple accomplishment from a 5F6A Bassman-derived circuit. Crank it up, though, and the clean channel is all bellowing big-tweed. By manipulating the very effective master volume, many players could get by simply utilizing just the clean setting on both channels and varied levels of gain. That said, I noted that the low end can get a little soft when the amp is pushed hard in clean mode. Perhaps that’s an inevitable byproduct of the relatively small 1×12 combo configuration. The Custom 90 is certainly a firm and well-balanced speaker. But running the output into a closed-back Port City 2×12 with Eminence CV-75 speakers made the Fillmore 50 utterly roar. It sounded more stack-like and authoritative, which implies great potential for the Fillmore 50 head option, too. 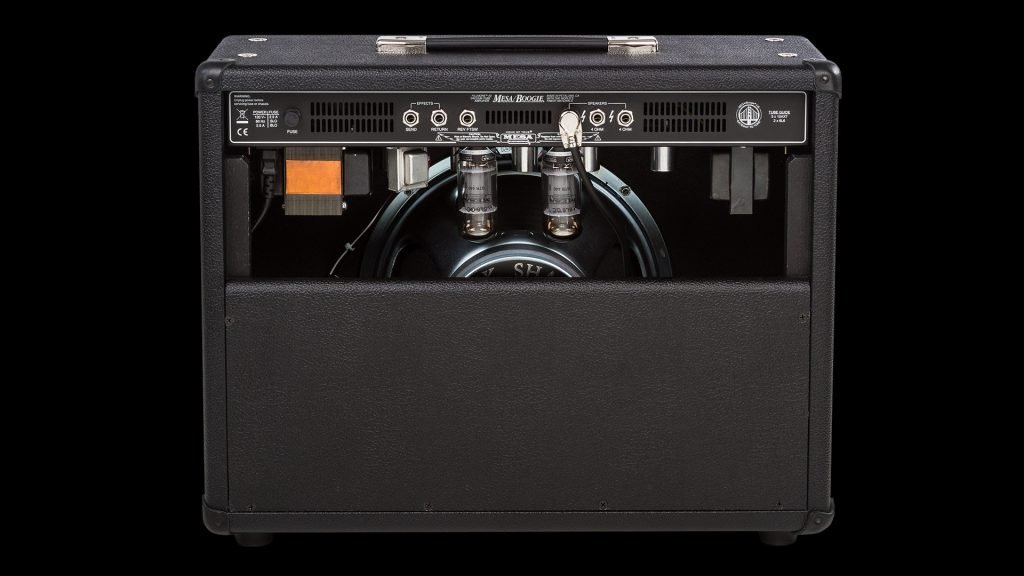 The “hi” gain mode is more classically Mesa Boogie. Lead tones are searing, rich harmonics accompany the transients of unison bends, and you hear excellent sustain. You can craft Marshall-like tones here, too. (The JTM45 and Plexi were born out of the tweed Bassman, after all.) But the basic voice is still overtly modern American, with a touch of refinement to the raunch and a tasty 6L6-driven balance throughout the frequency range. Of the three modes, I was least enamoured of the drive mode, which I found a little blocky sounding unless gain settings were very low or very high. It’s still a useful voice—just less thrilling to my ears than clean or hi. The Fillmore 50 works beautifully with pedals, too. A Wampler Tumnus Deluxe and Boss JB-2 Angry Driver integrated seamlessly into the overall sonic brew rather than sounding layered on top. The half-power setting works great as well. I’m not usually a fan of triode settings for achieving lower power. They can be mushy, soft in the lows, and overly mid-rangey.

But Mesa Boogie has dialed in this technique over the years, and the half-power setting really does deliver what sounds and feels like a lower-powered version of the Fillmore’s 50-watt self. The long-tank spring reverb, which can be set independently for each channel, was also lush, rich and appealing. And it didn’t sap the core tone or dampen articulation, even at fairly extreme settings. (High gain settings in “hi” mode might be an exception.) The Verdict Rugged, compact, powerful, and packed with three great voices on each of two entirely independent channels, the Fillmore 50 combo offers a lot for the money in a versatile, great-sounding, American-made (and American-voiced) combo that’s perfect for small and large gigs.

Get Your Mesa Boogie Valves/Tubes Direct From Amazon